India’s water crisis offers a striking reminder of how climate change is rapidly morphing into a climate emergency. Piped water has run dry in Chennai, the southern state of Tamil Nadu’s capital, and 21 other Indian cities are also facing the specter of “Day Zero,” when municipal water sources are unable to meet demand.

Chennai, a city of eight million on the Bay of Bengal, depends on the fall monsoon to provide half of the city’s annual rainfall. Last year, the city had 55 percent less rainfall than normal. When the monsoon ended early, in December, the skies dried up and stayed that way. Chennai went without rain for 200 days. As winter passed into spring and the temperature rose to 108° F, its four water reservoirs turned into puddles of cracked mud. 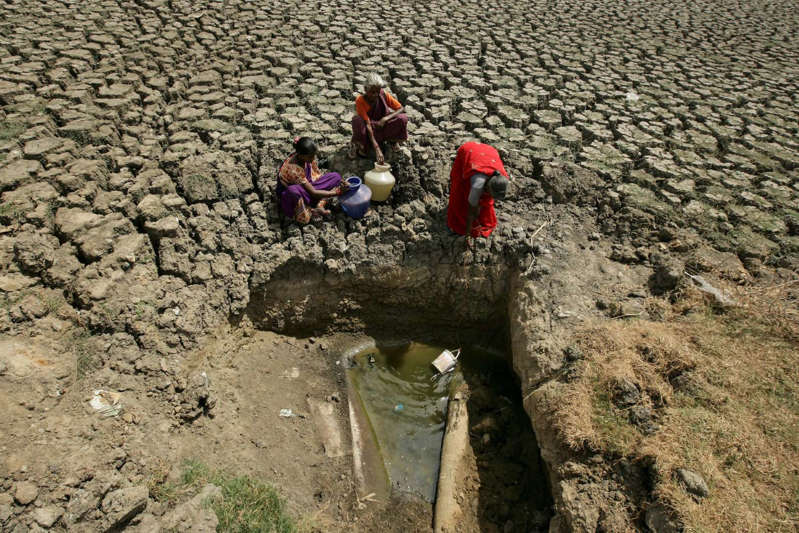 Some parts of the city have been without piped water for five months now. Weary women with brightly colored plastic jugs now await water tankers, sometimes in the middle of the night. On June 20, the delayed summer monsoon arrived as a disappointing light shower.

These water crises are now global and perennial. Day Zero plagues cities from Cape Town to Mexico City to São Paulo, Brazil. Nearly half of the human population is living with water scarcity, inhabiting places unable to fully meet their drinking, cooking and sanitation needs.

Middle- and upper-middle-class people in Chennai are paying twice as much for water from tankers, and they can afford to drill new wells twice as deep as would have been needed 15 years ago. “We are on war footing,” one of my cousins, who lives there, remarked. As with most environmental crises, the poor are affected disproportionately. Around the world, inadequate water and sanitation kills 780,000 people each year.

The story of water is global, but the impact of too little (or too much) water is intimately local. Solutions need to be local, too. Instead, governments in Chennai and elsewhere keep turning unilaterally to major infrastructure projects such as desalination plants and other large-scale projects involving linking distant rivers and constructing mega-dams.

Prime Minister Narendra Modi has promised piped water for all Indians by 2024. Indian government could meet that goal by looking beyond the gray confines of concrete to the green of powerful natural water systems that worked in the past and could work again. Mr. Modi’s government’s focus on huge projects is flawed because moving water works only if there is water to move.

South Asia has always been vulnerable to the vagaries of the monsoons that provide 70 percent of its water in a few months, feeding its rivers, recharging its groundwater and topping off the Himalayan peaks whose glacial meltwater sustains 1.65 billion people.

But to even consider surviving the climate emergency underway, India needs more than megaprojects. It needs the collective power of abundant, small-scale, nature-based efforts to seize the seasonal bounty across the diverse landscape of South Asia.

About half of the 6,000 water bodies that once defined Chennai and its two neighboring districts are gone. Rampant development and few environmental controls have destroyed the spaces that were natural sponges for monsoon rains.

But while reporting on environmental crises across India, I have witnessed effective efforts to renew natural capital through green infrastructure. In the Alwar District of the northern state of Rajasthan I stood on a hillside looking down on a verdant valley that had been brought back to life by villagers who built small-scale earthen dams known as “johads.”

Thousands had been constructed across the district, strategically placed to capture fleeting monsoon rains in a cascade before the water “ran away,” as a local told me. Aquifers — layers of water-permeable rock — were recharged, and wells that had been dry for a generation bubbled back into existence.

Similar efforts are scattered across India. In the Kumbharwadi watershed of the western Indian state of Maharashtra, a program engaged locals in tree-planting and land-sculpting to capture water across the landscape. Groundwater levels rose, soil fertility improved, and agricultural income increased tenfold. In a period of four years, the water tankers that citizens had depended upon in the dry season became obsolete.

Admittedly, these techniques of maintaining natural resources locally require more labor, but with unemployment higher than it has been since the 1970s, that translates to jobs.

With 90 percent of the country’s precious freshwater going to agriculture, India could also support established conservation practices and reconsider exporting such water-intensive crops as rice and cotton.

India is urbanizing at a rapid pace, and amid that human density lies opportunity. Chennai attempted to employ rainwater harvesting in 2003 that would have diverted rooftop water to tanks so that it could percolate down, compensating for the urban layer of concrete that now seals underground aquifers from monsoon abundance and contributes to flooding. But three years later, a new party was voted in and enforcement stopped. Additionally, metering could help isolate and fix the staggering leakage that loses one-third of all Indian water.

Indian government’s move toward more desalination plants — Chennai has just begun construction on its third in less than a decade — ignores that it takes tremendous amounts of energy to transform saltwater into freshwater. India is already struggling to get power to its people, even as the plants discharge toxic brine that is worsening already degraded coastlines.

The call to leverage green capital is coming from the highest echelons of global development. A recent World Bank and World Resources Institute report says that adopting these methods can ensure water security, fortify against natural disasters, reduce poverty and make the places we live resilient in the face of climate change.

There is no evidence that Mr. Modi will relinquish his pursuit of megaprojects, but he should remember that when grand projects fail, they fail grandly. India needs a million small answers for its 1.3 billion and counting. Small-scale systems that harness the immense power of nature rather than deny it require less capital and can be started up quickly in a way that macro systems, expensive and years in the making, simply cannot.

At a time when America’s eco-resolve is in tatters, India has the opportunity to step up and be a pioneer, rewriting the human development script for the 21st century and growing a new economy on a foundation of green growth. Now is the time to look to the knowledge of earth systems that we are so quickly altering if there is any hope of quenching our undying thirst.

Meera Subramanian is the author of “A River Runs Again: India’s Natural World in Crisis, From the Barren Cliffs of Rajasthan to the Farmlands of Karnataka.”